The recapture of a key position in the Batalik sector yesterday by Capt Amol Kalia and 13 of his men, all of whom died, was one of the bravest acts seen in the Kargil sector in the ongoing operations against Pakistani soldiers and Mujahideen.

Twentyfive Pakistani soldiers were killed before the 14 Indian troops from the Jammu and Kashmir Light Infantry and parachute commandos laid down their lives on the north-western slopes of the position at a height of about 16,000 feet after seven hours of intense fighting.

According to army spokesman Col Bikram Singh, the Pakistanis were well-entrenched and had made a number of field fortifications. Since the infiltrators had covered most of the approaches by fire, the Indian troops, in the face of intense shooting and heavy odds, scaled the objective and reached the top employing specialised mountaineering techniques.

The enemy counter-attacked the position during the early hours yesterday in which the light machine gun detachment personnel accompanying Capt Kalia were killed. Capt Kalia was seriously wounded but, showing exemplary courage, he picked up the LMG and charged at the Pakistanis killing four of them. Later he succumbed to injuries.

''In this operation, Capt Kalia along with 13 other ranks made the supreme sacrifice in the highest traditions of the Indian Army. But for the selfless devotion to duty marked with exemplary courage displayed by these gallant soldiers, the recapture of this vital position would not have been possible'', Col Singh said. 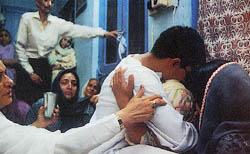 
MISSION: A specialist in mountain warfare, Kalia and his men were fighting for survival after being attacked. He grabbed a machine-gun and fought off the enemy before being shot.

Usha Sharma woke up in the night on June 9 with a feeling of unease. She shook her husband awake and they talked about their two sons, Flt-Lieutenant Aman Kalia and his younger brother Captain Amol Kalia. Three days later the premonition became a reality when newspapers reported that Amol had died at the end of a seven-hour-long offensive giving the Indian Army a "vital victory" in the fight for the heights of Kargil.

"Don't worry about me. I hope to be back in Delhi by the end of this month. Then you can fix my marriage in case you all are in a hurry." The letter from Amol reached his parents in Punjab's Nangal town on June 9. That was the evening their son and 40 of his men were fighting a fierce hand-to-hand battle against Pakistani intruders on an 18,000-ft high icy ridge codenamed position 5302 in Kargil-Yaldor. Air-dropped the previous day, Amol and his unit, specialists in mountain warfare, suddenly found themselves fighting for survival as enemy units poured in. Desperate for a light machine gun (LMG) after his two gunners were cut down, Amol managed to reach his downed colleague. He got the LMG, turned it around and mowed down about 20 infiltrators. He had no chance. The army suffered one of its heaviest casualties that day: Amol and 12 other ranks were killed. But two days later, the ridge was captured.

Amol's body hasn't yet been retrieved from the snow-bound battlefield, but his bravery is already legend in his home which has never seen such a mass outpouring of grief and pride. Its shrine is N-19, a nondescript house in the Bhakra Beas Management Board colony. Hundreds of mourners converge there every day as the town waits for the remains of its first National Defence Academy graduate. "Visiting Amol's house has become a sort of pilgrimage," says a 60-year-old resident. Processions of charged residents meander through town; even the rickshaw-wallahs organised one. Inside the house, packed with mourners, they watch as the local cable operator shows clips on Amol to the accompaniment of patriotic songs. "I could never imagine he could be so brave, for me he was still a kid," says S.P. Sharma, Amol's father, a school master. "I salute you my son," he sobs. He's reconciled to the loss, but "the wait for his body is agonising".

The army was never a big tradition in Amol's middle-class family, but he was dogged in his desire for an adventurous life. Nangal's hero has now become an inspiration to the town's young and restless. To their traditional choices of engineering and medicine, add a new rival: a life in the army.