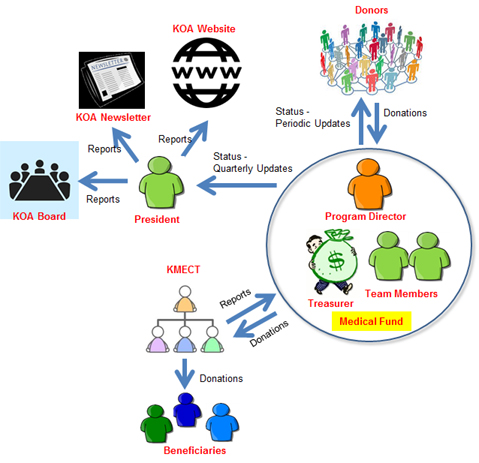 Since 1989 KOA started getting letters from Kashmiri Pandits (KPs), mostly from Jammu refugee camps, asking for financial help to treat their seriously ill relatives. The illnesses ranged from the damaged kidneys needing replacement, cancer, heart disease, diabetes, asthma to severe depression. In most of the cases the treatment was going to be provided outside Jammu, as the illnesses could not get appropriate treatment by the Jammu medical establishment. In 2002, KOA thought that a better way to run this program was to have a dedicated committee run it in an organized way. In 2003, the KOA Medical Fund, as the committee was called, was established during erstwhile KOA President Sanjay Kaul.

An applicant asking for the Medical Fund assistance, or someone filling the application on his behalf (for some stated reason), has to go through KMECT in India.