The refugee camps in Jammu and Kashmir house thousands of Kashmiri Pandits displaced from their homes as a direct result of the Islamic militancy in the valley. This tragedy has resulted in children being denied the opportunities that we take for granted. Since 1995, the Kashmiri Overseas Association, USA has implemented the Sponsor-A-Child Program for the age group 5 year olds to 17 year olds. This program aims to provide educational opportunities to the children directly affected by the tragedy. While individuals worldwide have contributed to these programs more children are in need of our financial support than currently available funds can support, there are many more that deserve our assistance.

Objective of the Program

To provide tuition, school supplies and living expenses to school children who are currently living in refugee camps.

The program started in 1995 to bring much-needed financial help to the indigent children of school-going age, from the refugee camps that have sprouted around Jammu in the wake of the exodus of the KP community from Kashmir. Shri Pran N. Kaul of Fremont, CA was the coordinator for this KOA program for several years. The program director maintains a list of children in need of support, with the help of a local liaison in Jammu, which is furnished to prospective sponsors on request. In the first year 36 children were supported through this program.

Community members and friends of the community are approached to take part in this program by becoming sponsors. Some community members have set up foundations in the name of their loved ones and are encouraged to sponsor through their foundations. There are some employers who match funds for such non-profit charitable causes. Sponsors are requested to explore such a possibility with their employers. Every drop helps.

The cost of sponsoring a child was originally pegged down at about $16 per month. During the past few years it has however, become evident that the cost is around $275 per year. Contributions to the children are tax deductible, if routed through KOA.

100% of the funds collected are distributed to the selected children through a registered non-profit organization in India. All people managing and coordinating these programs are volunteers.

Sponsors/Donors select the child they want to support from the list(s) furnished to them by the program coordinator on request. Payments are typically made by sponsors every six months, though a great number of them make yearly payments. Sponsors are required to mail their checks for the children to KOA that keep track of all payments and send reminders to sponsors to mail their checks when due. After receiving checks from sponsors, KOA in turn issues checks in the name of the children, which are mailed to liaison in Jammu, for distribution. 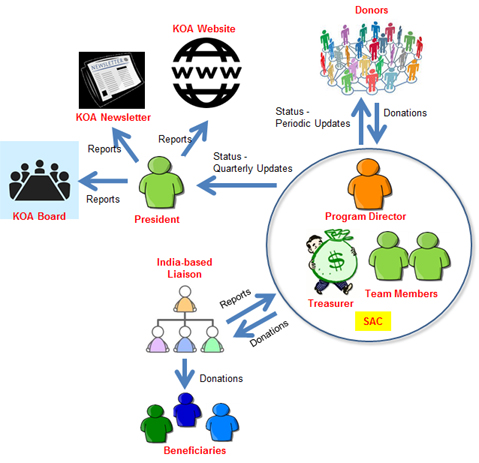 With a view to fostering rapport between the sponsors and the children supported by them, the children are encouraged and exhorted to write to their sponsors and vice versa. It not only helps the child feel a sense of belonging, but it also provides a unique opportunity to a sponsor to be a mentor to a hapless child who is otherwise adrift in a sea of misery, and without any sense of purpose or direction. Sponsors are expected and encouraged to evince interest in a child’s education by keeping track of his or her progress at school by asking for progress reports or marks cards and other similar documents issued by a school periodically.

KOA appeals to all the community members and friends of the community to rise to the occasion, as the need of providing financial help, counsel and guidance to the children is acute and real. Their parents are invariably either illiterate or lack the wherewithal to be of any help to their children. Our responsibility and commitment to these children is not just limited to mailing checks to them, but we have to play a much broader role in shaping their future, otherwise a whole generation will be lost for good. It is our duty to help a fellow KP in need; we owe this to ourselves and to our community. The time to make a difference is now, not tomorrow or a year from now. Needless to say, this is the best way to help our less fortunate brethren back home. KOA thanks all the sponsors who have supported the children over the past several years and take active interest in the welfare of the children. We would like to utilize this opportunity to appeal to others who have preferred to remain on the sidelines, to step on the plate and bring much-needed succor to a fellow KP in need and in a state of abject penury. If you are not a sponsor yet, please become one. Your community needs you.

Provide your assistance today and help create a better family for tomorrow. There are needy and deserving children who will receive an education with your contribution. Together we can make a difference in the lives of our less fortunate children. To join this program as sponsors or if you need more information, please contact KOA.

If you need any further information regarding this program or have any questions or comments please feel free to e-mail KOA.

Together we can make a difference in the lives of our less fortunate brethren. We thank you again for your support. 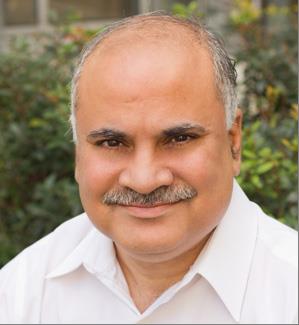 Sunil Fotedar’s association with KOA has been since 1990-1991 when the Kashmiri Pandits back in Kashmir were driven out of their homes due to turmoil. Sunil was Houston chapter president for KOA in 1991, and served twice as KOA National President in 2007-2008 and 2015-2016. As KOA webmaster in 1996-2001, he developed and maintained web servers for KOA, and contributed to the development of several community fora, and incorporated KPnet as KOA’s official communication platform to allow KOA members to communicate and discuss topics of mutual interest with each other.

Sunil has been interacting with several India-based KP associations and community activists in Jammu, Delhi, Mumbai, and Kolkata over the last two decades and more. He has created a variety of community websites for various organizations such as KOA and Panun Kashmir – the first Kashmiri Pandit to create what has been referred to as Virtual Sharda Peeth – a Repository of a Kashmiri Pandit’s culture, heritage, religious practices, language, music, history and political literature.

During Sunil’s first tenure as KOA president (2007-2008), KOA was bestowed with Sharda Samman by Panun Kashmir at the 3rd World Kashmiri Conference (delivered in 2009). During his second tenure as KOA president (2015-2016), Sunil created several Facebook and Linkedin groups for US-based community to cater to the needs of youth and entrepreneurs; published second edition of Poozai Posh – a prayer and hymn booklet, Festivals of Kashmiri Pandits written by Sh. Omanand Koul, KOA Calendars for each year (distributed Vijyeshwar jantri), KOA Directory comprising US-, Canada- and Europe-based membership information; organized art and talent competition for youth; and signed up exactly 100 life members (out of 265 total at the time). He was instrumental in creating Standard Operating Procedures (SOP) for the organization; and soon to be launched membership-based KOA website. He has helped the 2017 KOA administration with setting up Quickbooks to manage finances, and with defining the process for the entire lifecycle of KOA-sponsored education programs, and developing requirements for an online application for the same.

To recognize for his previous community efforts, Sunil was presented with Special Zaan Award by the Kashmiri Pandit Association, Mumbai. He was featured as an Indomitable Personality in The Sharada Tarangini, Vol. 1, No. 3, March/April-June 2004 issue, the Official Newsletter of Kashmiri Sewak Samaj, Faridabad. He was also given KOA Plaque for Internet Activities (1997), first of its kind given to any volunteer.

Sunil holds a B.E. degree in Electrical Engineering from Regional Engineering College, Srinagar (India), an M.S. in Electrical and Computer Engineering from Rice University, Houston, and an M.S. in Applied Mathematics with emphasis on Probability and Statistics from University of Houston at Clear Lake. He was a recipient of two gold-medals in Srinagar for standing first in the 10th and 11th state board examinations. He has worked in several industries – in space industry working as contractor for NASA on Space Shuttle and Space Station programs, as well as an IT professional in Telecom, SSA, CMS, e-commerce and banking. He is currently working as a Reliability engineer for Oil and Gas industry in Houston. 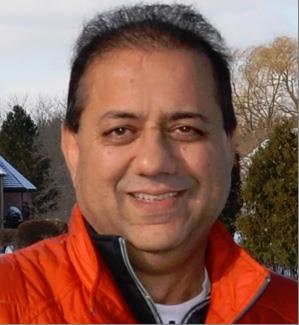 Praveen Raina is an active member of the Chicago KP community since 1998, organizing and supporting local community events and served as Chapter President in 2004.

Praveen is also the founding member of the Kashmir Welfare Initiative (KWI) in 2007 and Kashimiri Heritage Initiative (KHI) in 2014. KWI collected over $50K from the local community to support charitable activities in Jammu for vocational education of KP youth and ladies. KHI was a Chicago KP community effort to educate kids regarding Kashmiri language, history and culture. He is also engaged with other non-profit organizations internationally and has served in various capacities.

Praveen grew up in Bihar and Delhi before moving to US for his graduate studies at LSU and is currently Director of Product Management at Motorola Solutions. While at LSU, he developed and maintained KPnet in early to middle of 1990s – the very first electronic communication forum that allowed KPs living in several Diasporas worldwide to stay connected with each other – it was long before such platforms as yahoogroups, googlegroups, facebook and twitter came into existence.

Praveen is married to Anshu Dhar Raina and they have a daughter Prachi, who is currently a student at UW, Madison.

Number of Beneficiaries from 2007 onwards

Year 2019 has beaten all the previous records in revenue and expenditure. Since 2007,